We are going to step into the era of seeing, hearing and feeling different worlds – a fictious computer generated world, a real world accompanied with augmented information and a world combining both virtual and augmented content.

Technological development is at a point where these possibilities are available for companies and consumers. The most affordable gadgets are available at a price level of few hundred Euros. Technical solutions are emerging rapidly and new devices are announced on weekly basis. According to Gartner’s report of Hype Cycle for Emerging Technologies both Virtual Reality and Augmented Reality are moving towards the Slope of Enlightenment. Maturity for everyday usageand the level of productivity will be reached in 5 to 10 years, says Gartner. The current moment contains alot of risks, but a huge potential of market success exists already.

Typically, the available devices are various virtual glasses and data glasses. The easiest solution for virtual reality can be experienced with a virtual screen, where a smartphone is used as display unit. After attaching a phone into a virtual glass chassis theuser can start exploring three-dimensional virtual worlds. In the future, we will see modern devices and even such appliances that may now appear to be science fiction. That’s what we thought about mobile phones just a few decades ago.

How about your company? Have you figured out how virtual reality will affect your business? What kind of interfaces and interoperability becomes possible with products and services you create through these new technologies? How do you communicate with customers and partners in the coming years? And what is the outcome of these new technologies for your marketing department?

As a consumer, have you been thinking how virtual reality and augmented reality will change your daily life? How do you make three-dimensional video calls, watch interactive movies where you are one of the actors? How are you going to do shopping when a web store selection is virtually present inside your home? Your home might be the scene on future action game!

At Sovelto, we are monitoring development of virtual reality, augmented reality and mixed reality. We are also participating in development and utilizing these technologies. Currently we have been testing for example Oculus virtual glasses and Microsoft HoloLens. Based on our observation, this is just a prelude of a new technology symphony and many things will change and evolve. Changes will be enormous: it will be possible to create totally new types of services on top of these promising technologies.

We think it is reasonable to jump into a technology cycle right now. Early adopters will have the advantage when the virtual reality and augmented reality will hit the market wide range in two or three years. We are updating our training services to provide courses on virtual reality and augmented reality, but at the moment we provide consulting services per each customer. Ask for more details from our Sales department! 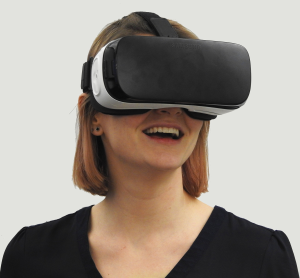 A Smartphone inside a virtual glass chassis
is the most affordable solution for experiencing
virtual reality.

Virtual Reality, (VR) is a presentation for the viewer where the synthetized view will fully replace the spectator’s sight. The view can contain abstract creatures or objects that look like real world objects. Also, the space around the viewer may be a reflection from the reality, or it can be a totally fictive creation. In virtual reality, the sounds can be generated artificially.

Augmented Reality (AR) is a real-world presentation in real-time for the viewer, but the scene can contain additional visual information like text, icons, indicators or other visual effects. The user can hear real world sounds, but additional sounds can be played for her like speech, signals and other sound effects.

Sovelto has been testing Microsoft HoloLens since October 2016.

Mixed Reality (MR) is a combination of real-world scenery increased with information feeds from augmented reality and synthetized visual and audible effects from virtual reality.

Join the conversation (in Finnish)

You can find out more about which cookies we are using or switch them off in settings.

This website uses cookies so that we can provide you with the best user experience possible. Cookie information is stored in your browser and performs functions such as recognising you when you return to our website and helping our team to understand which sections of the website you find most interesting and useful.

Strictly Necessary Cookie should be enabled at all times so that we can save your preferences for cookie settings.

If you disable this cookie, we will not be able to save your preferences. This means that every time you visit this website you will need to enable or disable cookies again.

This website uses Google Analytics to collect anonymous information such as the number of visitors to the site, and the most popular pages.